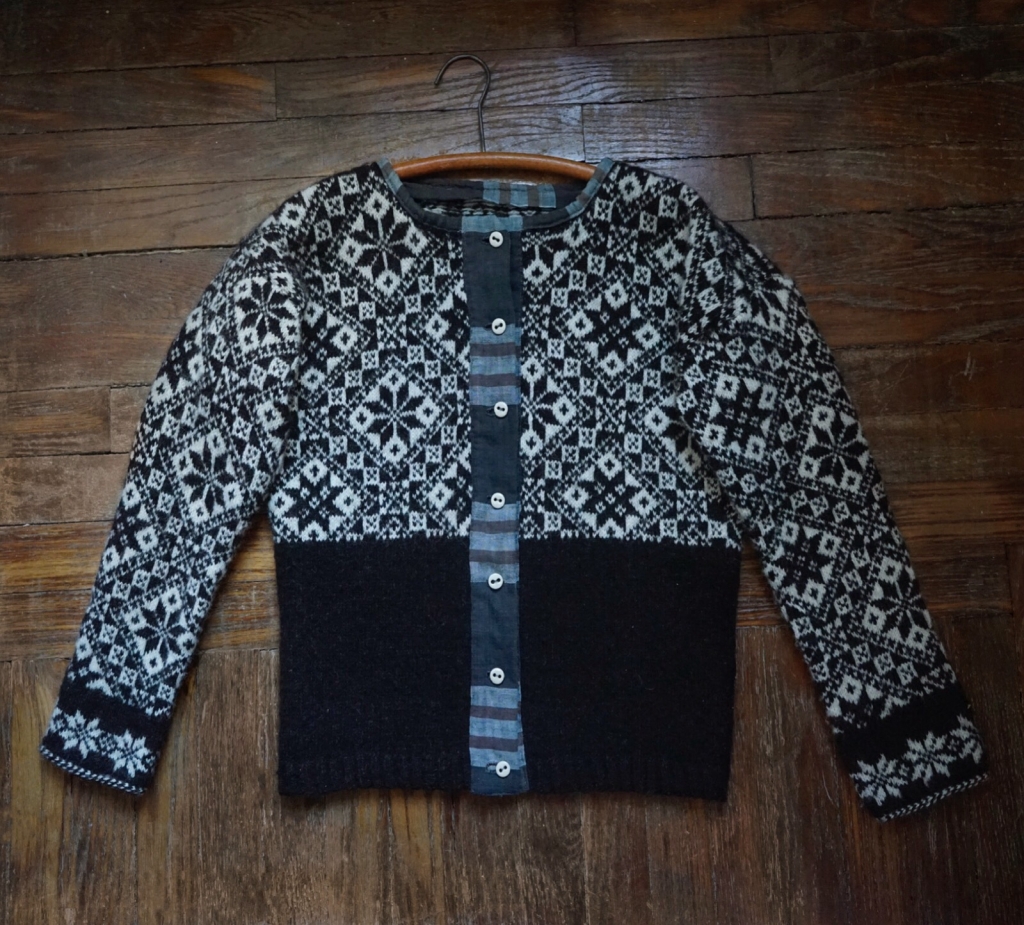 I finally finished this piece that was over a year in the making. It’s based off of an old sweater from Sotra, Norway called a stjernetrøye (star sweater) that’s in the collection of the Bergen University museum:

I saved this same picture of this sweater many years ago because I thought it was the most striking knitted piece I had ever seen. Fast forward to last year when I first visited Eirik’s home, he took me to a museum group he worked at and lo and behold that same sweater was on view in their collection. I was so excited and took countless photos of it. A few weeks later I looked into the history of the sweater to try to knit it, and upon looking into it I found that the sweater in the Bergen Museum was worn by a man named Nils Storesund. Eirik has the same surname, Storesund, and there are only 430 people in Norway with this surname. He looked into it some more and could even possibly be related to him distantly. Fate ! I had to knit it.

This sweater has modern patterns available (ex: ull.no does a Sotra pattern), but I don’t feel any had the old feel and fit I was looking for so I didn’t follow anything other than the photo above. I wanted the older style of a tighter fitting sweater with a solid color bottom that is meant to be tucked into pants. I enjoyed the slow process of problem solving this one. To dissect a piece I saw with only my eyes and to re-create it with no pattern, no instructions, but just intuition and trail and error. I re-knit the body twice, the shoulders 3 times. It was a slow, trying process, to get it as it appeared in memory and to my own custom liking.

It was knit with 2.0 mm needles in three pieces. The bottom black half of the body was knit in two-stranded “colorwork” to mimic the weight of the rest of the sweater. The bottom half of the body is usually white, but black suited my wardrobe more. The black yarn is from Blæset sheep (a crossbreed from Rogaland, Norway of Rygja and Spælsau formed in the 1920s) and white yarn from Rygja sheep made by Selbu Spinneri. Selbu Spinner creates yarn that focuses on increasing the use of Norwegian wool. This particular yarn was spun at Hillesvåg- a mill started in 1898 not too far from Bergen. 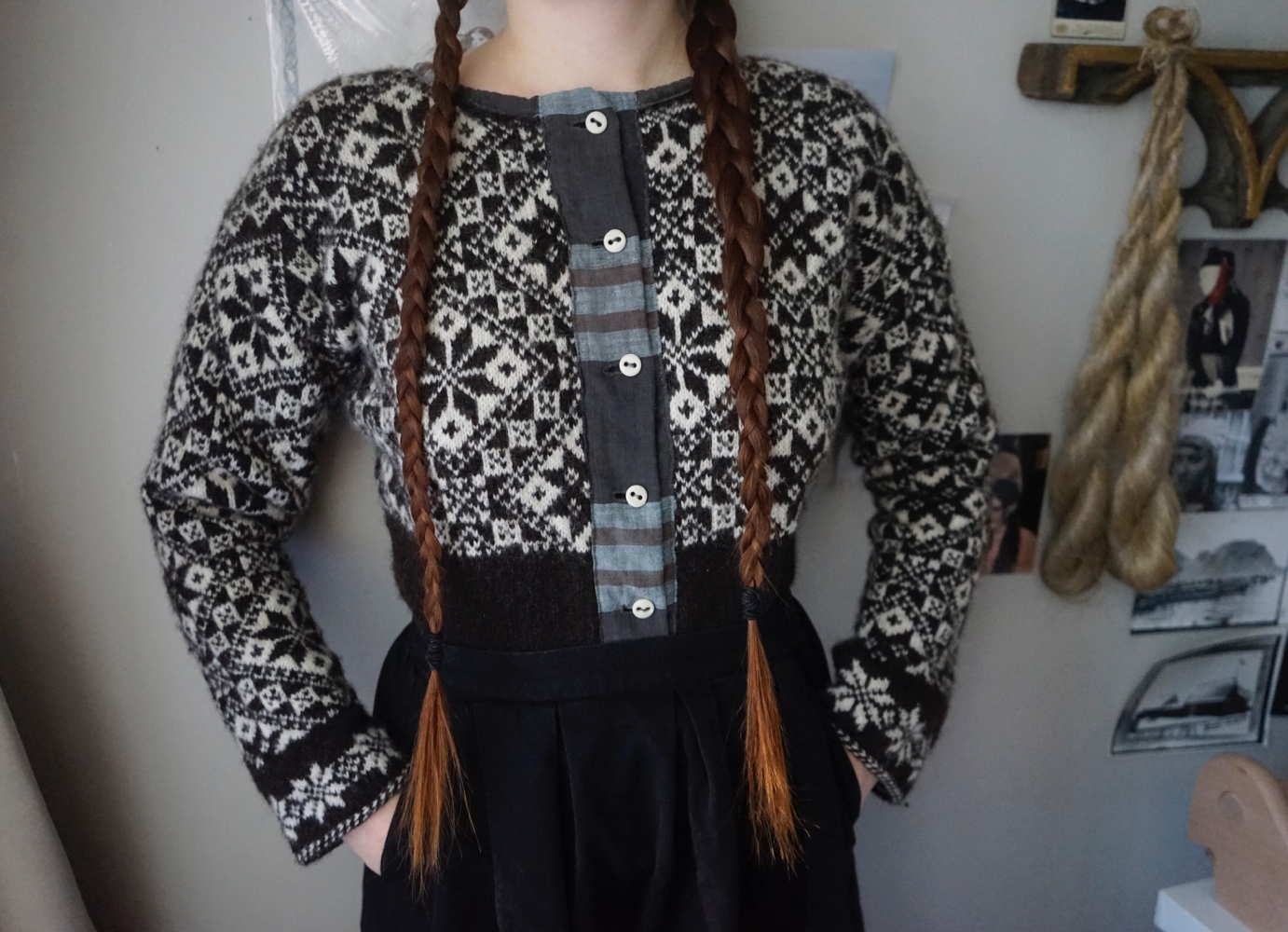 The plaid button band is made from a handwoven 1930s Japanese futonji (bedding cover) dyed with indigo and other natural dyes. I am not skilled at sewing, I’ve only hand-sewed a handful of times, so this part was a challenge. Attaching handwoven interfacing, creating 7 button holes (first practicing at least 20 times since I had never tried previously), and attaching it to the sweater. Every element is handsewn- the hidden steek down the middle (that was an incredible pain to do by hand, I don’t think I’d ever do it again), the arm holes with a kitchener stitch, the button holes. The buttons are made of glass. 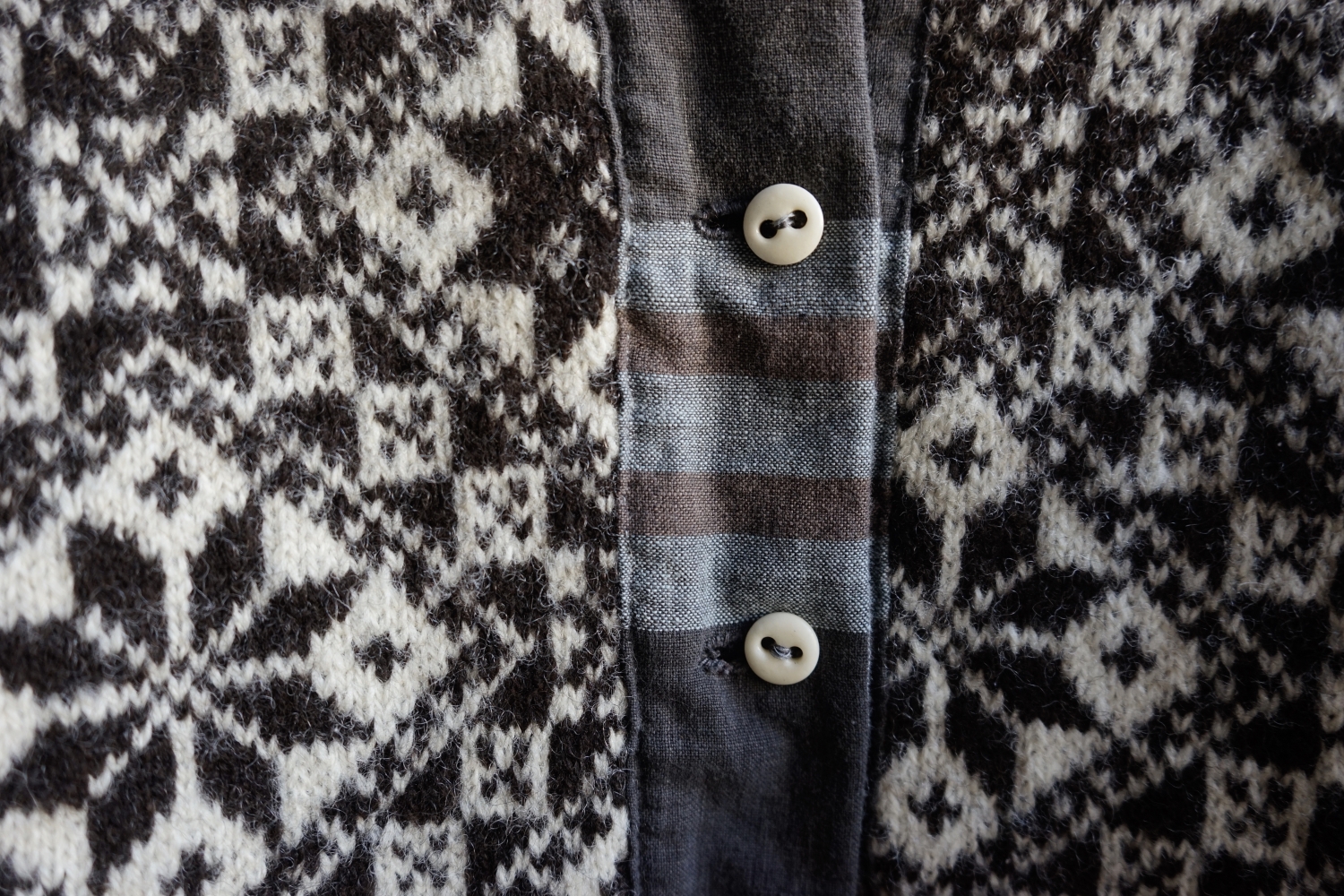 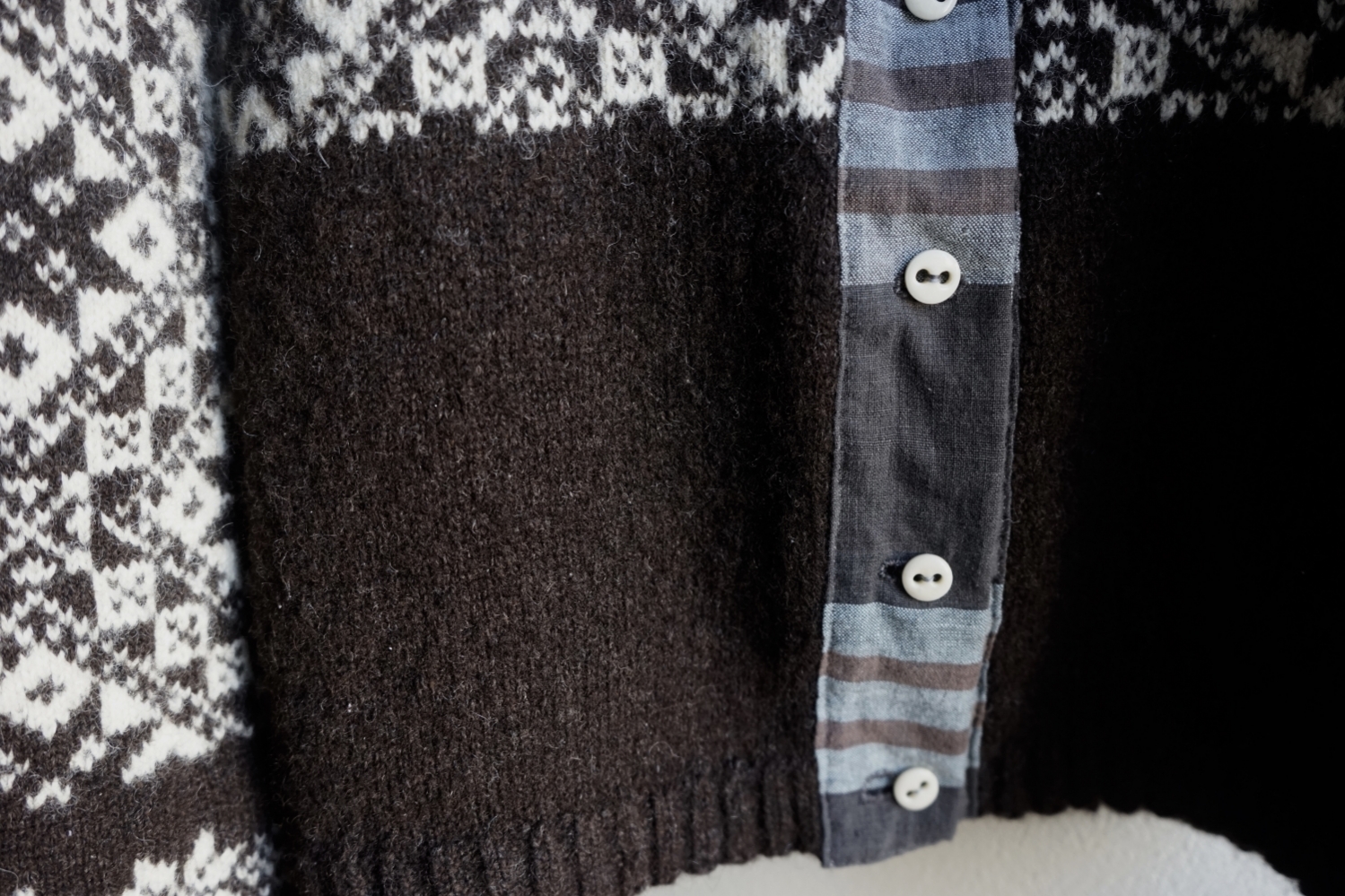 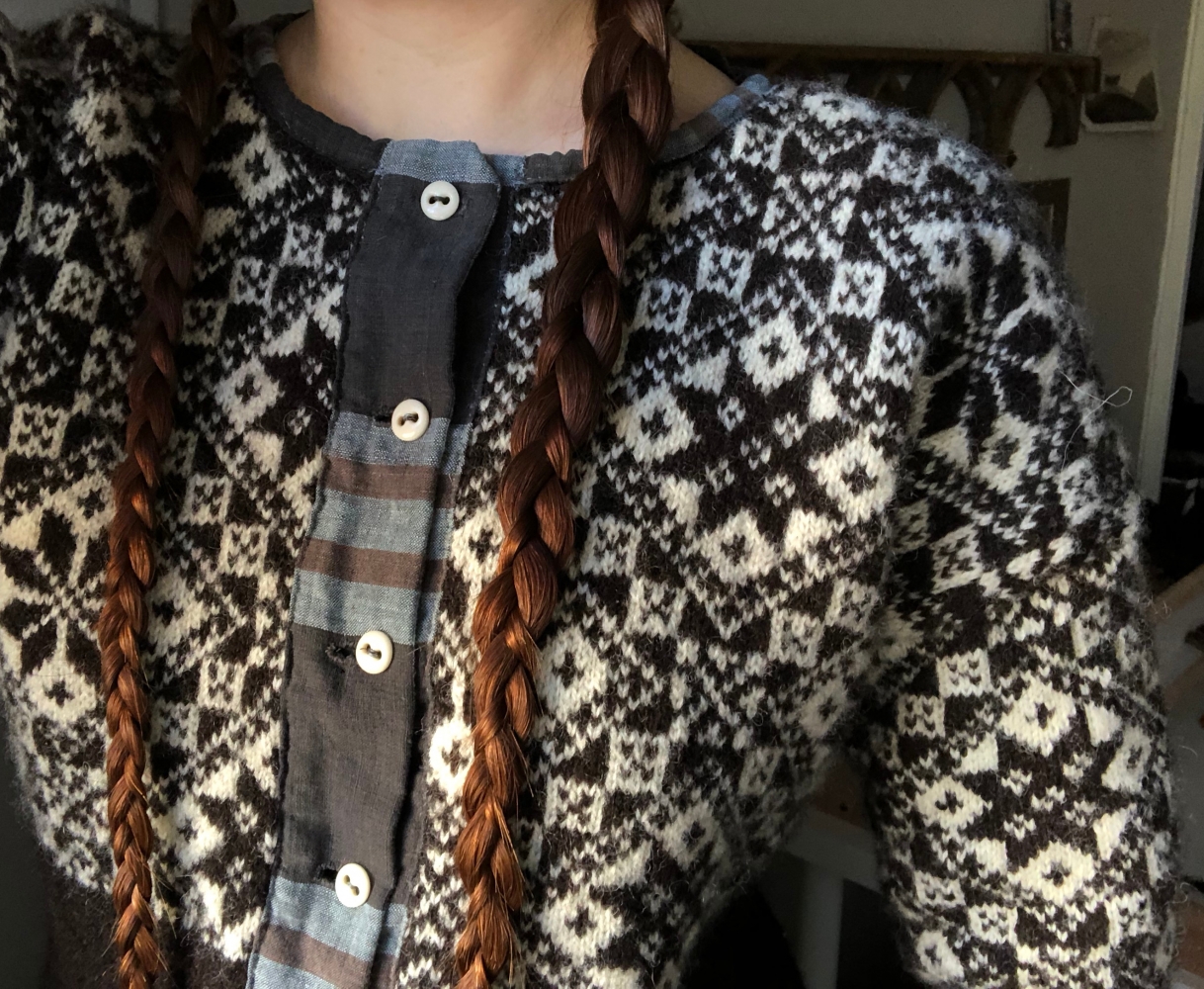 Some history on the Sotra sweater I read in a book on Fana sweaters (Fanatrøyer, Fana husflidlag, 1998):

In the village chronicle for Fjell (an area outside of Bergen where Sotra is located), Gunvor Trætteberg wrote that the tradition with knitting with 8-leaf roses came to Sotra with sailors from Hardanger around 1850. After that it seemed that this style of knitting fashion became popular because there are several older photos from people around Fjell who wore these sweaters as everyday wear and as a finery. Very elaborate sweaters have been preserved and there are many variations both in the main pattern as well as the pattern on the cuffs/shoulders/neckline/etc. There was also two variations where some sweaters had button bands and others were pull-overs with a small button band by the neck at the top. Many people in this area had sweaters like this and some people may have been so good at knitting them, they may have done it for extra income.

The sweater in the collection of the Bergen University Museum was commissioned by Nils Storesund possibly around 1910, and knit by a woman form Kallestad, which is a farm a bit away from Storesund. It’s possibly he paid money for it or it was taken in exchange for wears that Nils Storesund had sold.

Photos I took of the Bergen University museum sweater: 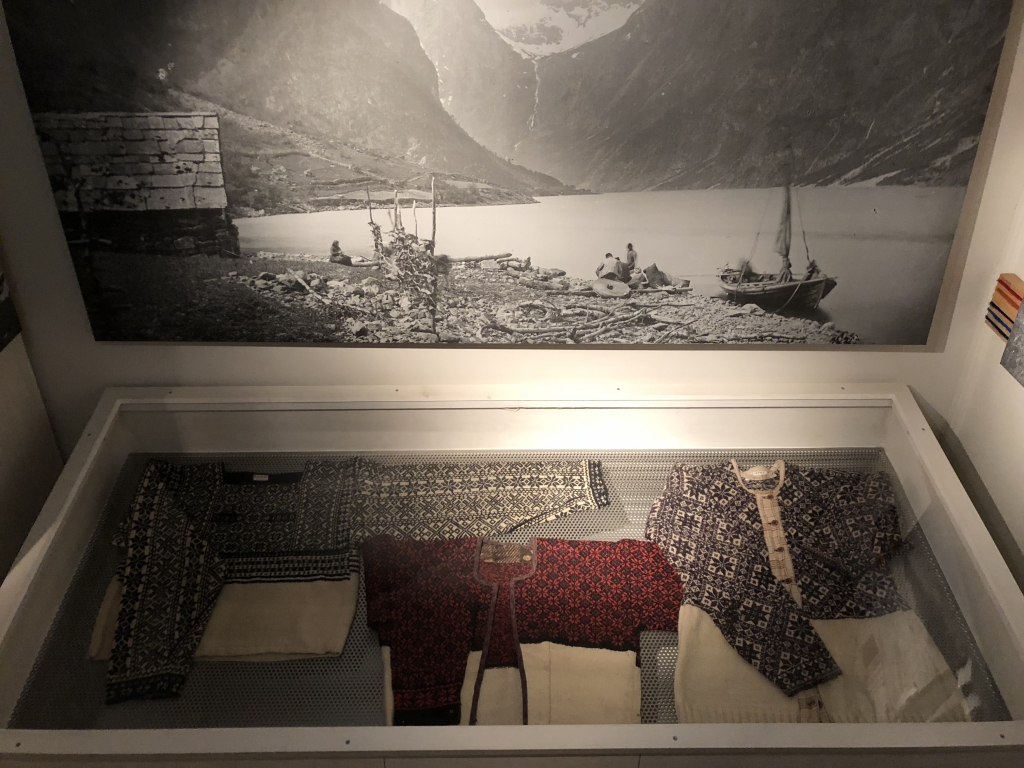 Examples of similar sweaters in other museum collections: